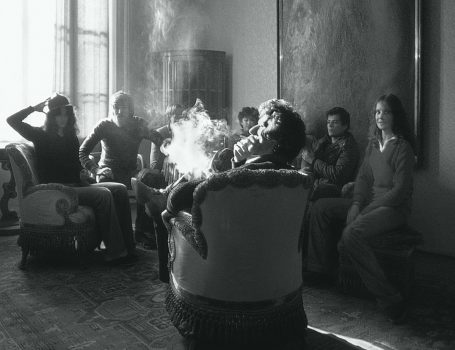 is a 1966 mystery thriller film directed by Michelangelo Antonioni about the fashion photographer Thomas, played by David Hemmings, who believes he has unwittingly captured a murder on film. It was Antonioni’s first entirely English-language film.

The film also stars Vanessa Redgrave, Sarah Miles, John Castle, Jane Birkin, Tsai Chin, Peter Bowles, and Gillian Hills, as well as 1960s top model Verushka Countess von Lehndorff. The screenplay was written by Antonioni and Tonino Guerra, based on the novel Las babas del diablo by Julio Cortázar. The film was produced by Carlo Ponti, the soundtrack was written by Herbie Hancock, and some movie scenes were performed by Jimmy Page, Keith Relf and Jeff Beck as members of contemporary rockband The Yardbirds.

For us this movie was The Holy Bible itself. I don’t know how often I watched it. All the dialogues we knew by heart and to the end of the film when Jeff Beck smashed his guitar, we were already looking forward to watch the movie again. Again and again and again!

The film is a masterfully produced parable of reality versus imagination – and it raised the popularity of photography itself  more than anything else before.

My photograph of 1979 was shot on the original movie location in Maryon Park, Greenwich, London / UK.